In the summer of 2007 the Brothers of Tau Tau Chapter partnered with the Southern California Cease Fire Committee to roll out the “Safe & Sober Summer Campaign”. Southern California Cease Fire Committee is a community based organization comprised of volunteers from South Central Los Angeles, Compton and Watts that were formed to continue the “Peace Protocol” developed by Stanley Tookie Williams before his execution.

On July 16, 2017, the Brothers of Tau Tau Chapter in Compton, CA, and the Southern California Cease Fire Committee celebrated its 10th Safe & Sober Summer Campaign by handing out over 11,000 bottles of water to the residence of Compton on the Corner of Rosecrans and Central Ave.

The Safe & Sober campaign is intended to promote a safe & sober summer because statistics showed a spike in crime and gang related activities in the warm summer months and over 85% of all violent crimes are committed wile under the influence of alcohol and or drugs. 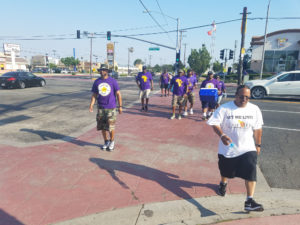