On July 08, 2018, the Brothers of The Mighty Tau Tau Chapter of Omega Psi Phi Fraternity, Inc. were asked by the Southern California Cease Fire Committee to support a “Community Service Project”. This project is commonly referred to as “Safe and Sober Summer Water Give-away”. During this event the Brothers donated and passed out bottles of water at the corner of Crenshaw and Manchester Bls. This event was coordinated by Brother Keith Parker.

The Safe & Sober campaign is intended to promote a safe & sober summer because statistics showed a spike in crime and gang related activities in the warm summer months and over 85% of all violent crimes are committed while under the influence of alcohol and or drugs. 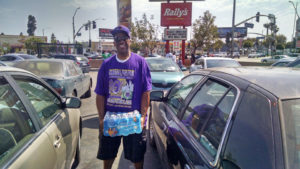