The Unveiling of Barack Obama Boulevard May 2019

On May 4, 2019, Brothers from Tau Tau Chapter of Omega Psi Fraternity, Inc., attended the “unveiling of Barack Obama Bl.” This event was coordinated by the City of Los Angeles in honor of the 44th President of the United States. This was an historic event in which the men of Omega were invited to attend.

The location selected is where Obama Boulevard will intersect with Martin Luther King, Jr. Boulevard, creating one of the most significant African American points of interest in the country. It also establishes a “Presidential Row,” that is, Washington Boulevard, Adams Boulevard, Jefferson Boulevard and Obama Boulevard in America’s 2nd Largest City. 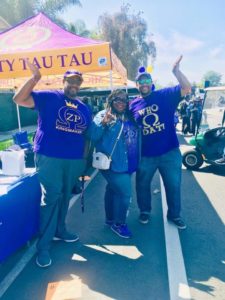