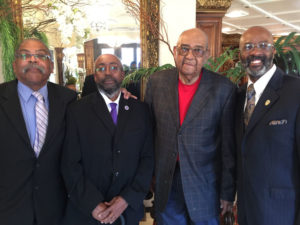 Tau Tau Chapter was founded February 3, 1961, with 25 members. The first installation of officers was performed at the Roundup Restaurant. The first five Basilei of the Chapter were; Sylvester Ward, Huey Dredd, Wilfred Smith, Emmitt Cox, and Marco Valley.

On April 6, 2019, Brothers from Tau Tau Chapter of Omega Psi Phi Fraternity, Inc., met with one of Tau Tau Chapter’s Founders Brother and Dr. Thomas Gibson. The following Brothers were in attendance Rev. Terrell Taylor, Floyd Knox, and Paul Hodson. The purpose of this visit was to recognize and thank Dr. Gibson for his hard work along with our other founders to establish our Chapter and to ask him to provide wisdom, direction, and uplift to our chapter as it conducts business today.

During this visit Dr. Gibson shared the following information with all brothers in attendance:

I came to California after finishing veterinarian school. I originally landed a position with the government in Eastern Oregon on the Snake River. It was about 15 degrees below zero, and this was cold weather being that he was from Mississippi. He went on to say, California was the warmest place he knew of, and within two weeks he transferred to California.

In December of 1949, he pledged at Le Moyne College in Memphis, Tennessee because his brother was an Omega and that’s all he talked about. Segregation was at an all time high. There were only two schools Blacks could attend Booker Washington and Manhasset. He went on to say, he is sure some people are amazed to see the world did not come to an end with integration. We have come a long way.

When they (the founders), founded Tau Tau Chapter, there were about ten or 11 men interested in taking on this task. Dr. McKinley Exum (one of the founders), made Brother Gibson at Marion College in Memphis, Tennessee.

He stated the pledging process today is much different than it was when he crossed. Today the process is on an upper level and brothers are asked to do more with less.

Dr. Gibson stated; he is very proud of the brothers of Tau Tau Chapter. They are doing a tremendous job of selecting and initiating brothers with high character. Keep doing what you are doing in the community and continue to change our youths and guide them in a positive way. Teach our young men to be leaders and outstanding citizen.

“I have much love for Omega Psi Phi Fraternity, Inc.”

The Brothers of Tau Tau Chapter are committed to recognizing all Chapter Founders for their leadership used to shape our Chapter and their commitment to the community.